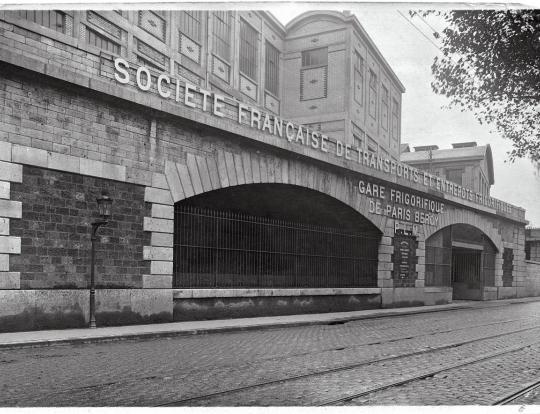 In the mid-19th century, the only techniques for keeping products fresh were salting, smoking and drying. Refrigeration systems began to appear in the late 1850s. In 1876, Charles Tellier attempted to transport meat from Rouen, France, to Buenos Aires, Argentina, using these new techniques. He transformed an old sailing ship into a steamship, which he called the Frigorifique. He successfully crossed the Atlantic in 105 days and the 30 tonnes of meat arrived in good condition.

However, it wasn't until the First World War that refrigerated transport truly took off. The French soldiers on the front needed to be fed, as did their British and American allies.

The story of STEF began in 1920. Following the end of the First World War, French railway companies sought to set up their own chilled freight forwarding businesses. The company PLM (Paris, Lyon, Méditerranée) decided to found Société Française de Transports et Entrepôts Frigorifiques. This was the first step towards the development of STEF Group. 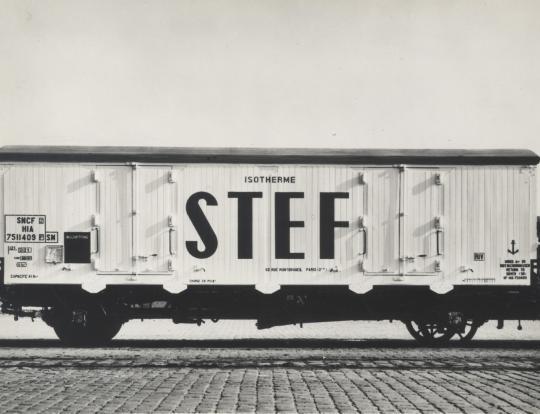 The French national railway company, SNCF, was established in 1938. It came to own almost all of the French railway network, which had belonged to defunct operating companies.

STEF and its competitors of the era, the CTF and the SEF, soon became subsidiaries of SNCF, which bought all STEF's fixed and mobile equipment, including 600 railway trucks, and acquired a 98% stake in the company. STEF was put in charge of managing all the equipment of the three merged companies.

STEF continued to grow during the Second World War, building a warehouse in Perpignan, despite the difficult supply conditions. After the war, the French people suffered from hunger. Protracted food shortages persisted into the late 1940s, making it difficult to feed the population, despite the emergence of tracks enabling railway cars to reach speeds of up to 100 km/h and shorter transit times. 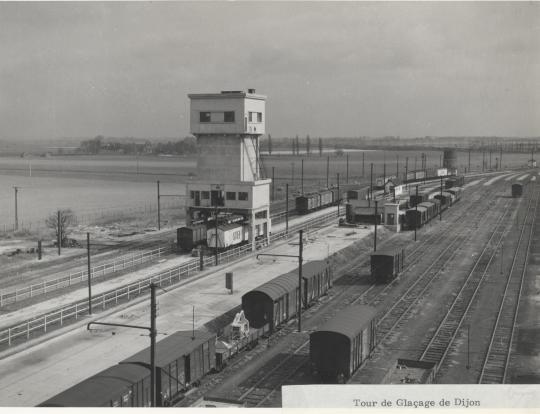 Road transport began to gain momentum in the 1950s, but the new competition did not appear to pose a threat to STEF, an SNCF subsidiary. Lorries did not have any cooling equipment, so railway trucks were the main means of supplying major cities and transporting goods over long distances. Lorries were chiefly used to bridge the gap between producers and train stations.

In the 1960s, STEF had about a thousand cooling, thermally insulated and refrigerated railway trucks. The company had stations across France, in Paris, Saint-Brieuc, Strasbourg, Limoges, Dijon, Avignon and Perpignan.

In the past, STEF preserved perishable foodstuffs by producing large quantities of ice blocks and inserting them into the compartments manually. The invention of icing towers offered a technical breakthrough. The railway trucks could now stop below a tower and the ice would fall directly into the compartments, without the need for physical labour. 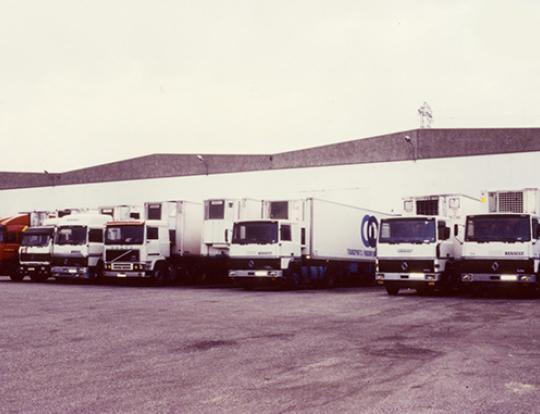 Pierre Legras was appointed Managing Director in 1981 and aimed to "build a national refrigerated freight-forwarding provider". At the time, TFE had 1,200 vehicles and a workforce of 2,500, split between five regional companies: Sud-Ouest, TFO, Ronazur Froid, Sodelpha and Eurotransit.

To ensure a strong visual identity, in 1982 a logo was created illustrating the company's values, motto and line of business. The TFE logo served as an inspiration for the initial sketches of the STEF Group logo. Each colour and shape has a meaning: the white represents purity, cleanliness and hygiene, while the blue symbolises cooling. The overlapping circles, the emblem of safety and the cold chain, represent all the TFE companies uniting to form a mutually-beneficial network. 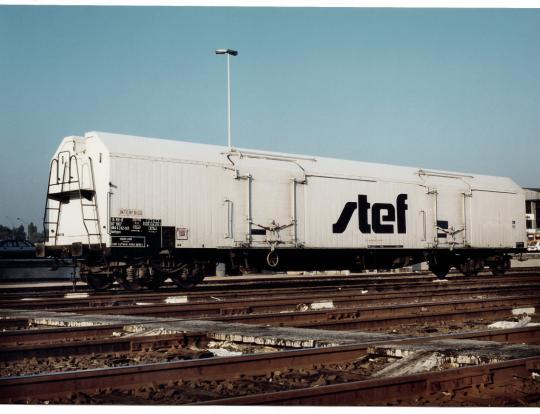 SNCF divested STEF, its subsidiary of over 50 years, in 1987. TFE appeared to be in the running to acquire the company, but was not alone.

Financière de l'Atlantique was a low-key player at the time. Founded in 1983 by Francis Lemor and Bernard Jolivet, the company set out to "build a group encompassing all the cooling business lines". The founders were convinced that the market held promise and decided to go into business, despite their lack of recognised expertise in cold-chain logistics. They started out with several thousand cubic metres of warehouses.

Following investments in western France and the construction of new sites, Financière de l'Atlantique caused a stir by acquiring STEF. 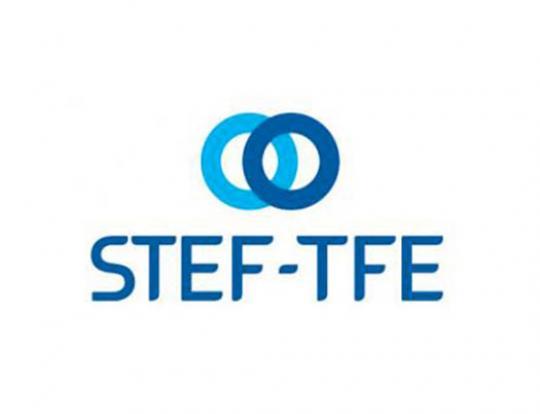 In 1996, the company became STEF-TFE. It comprised three networks: STEF, TFE and Tradimar.

In 2012, STEF-TFE began trading under a single commercial brand across all its networks: STEF. The change was a natural development stemming from the gradual convergence of expertise amongst all the temperature-sensitive business lines in Europe (transport, logistic services and information systems). It responded to a top priority for our clients: safe, coordinated services with guaranteed consistency and a high level of quality across business lines, regions and countries. 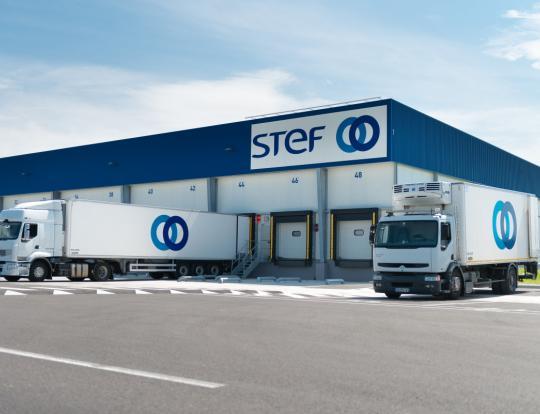 In 2013, STEF acquired EBREX France, a specialist in road transport of temperature-sensitive goods and logistics services for food away from home (21 sites). The merger of the two organisations cemented STEF's positioning as a service provider to the French food market.

In 2014, STEF acquired the Dutch company Speksnijder Transport, which runs a multi-temperature platform that handles logistics and consolidation operations across Benelux. Then, in 2016, STEF acquired VERS EXPRESS, a company that specialises in the distribution of chilled food products, as well as a 40% stake in NETKO along with the company's property. These acquisitions have strengthened STEF's European network in the Netherlands and its foothold in Northern Europe. In 2018, the STEF umbrella brand was rolled out in the Netherlands, completing the integration of the three Dutch companies into the Group. As such, STEF now enables industrial companies in Southern Europe to expand their business in the Netherlands and Dutch players to gain easier access to Southern European markets. 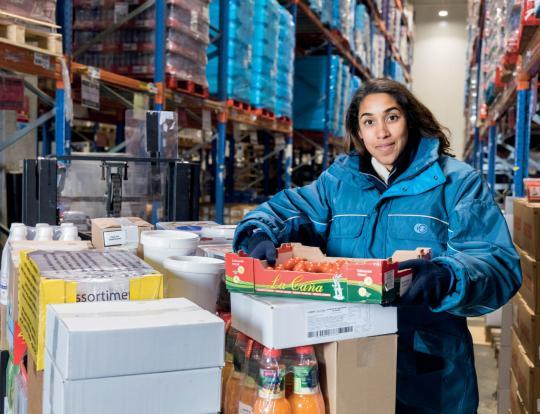 In 2016, STEF signed a European partnership agreement with NORDFORST, the German leader in logistics for frozen products, opening up new opportunities for its clients in Northern and Eastern Europe.

That same year, the Group announced that it would pool its logistics network with EMMI, the Swiss dairy industry leader, and open a wholly owned site in Kölliken in 2018, to consolidate its position in Switzerland's chilled products logistics segment.

In 2019, STEF implemented a new operational structure based on business unit specialisations, as part of ongoing efforts to better meet its clients' needs.

Over the years, the Group has successfully evolved and adapted to emerging consumer trends and technologies, such as the wide array of new distribution channels, product diversification and the acceleration of logistics flows. STEF has finally achieved its goal of becoming the European leader in cold-chain logistics.

This site uses cookies for audience measurement purposes and to improve your experience.

By continuing to browse this site, you accept the use of cookies. For more information, click here